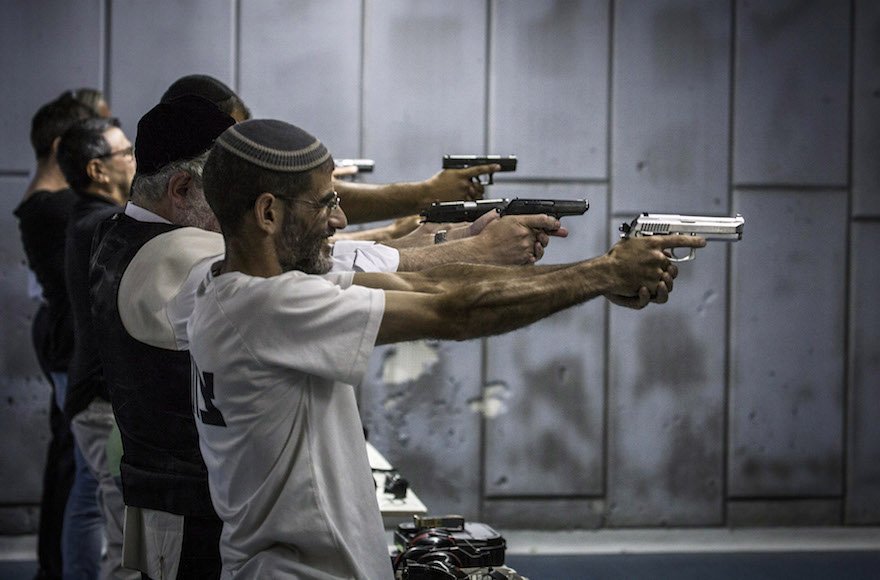 First-time visitors to Israel might be taken aback to see groups of armed teenagers walking through a city plaza on a weeknight, or surprised to walk into a public bathroom and see an M-16 laying across the sinks as a soldier washes his face. But guns are ubiquitous in Israel, where most 18-year-olds are drafted into the army after high school. However, once those soldiers finish their service two or three years later, they are subject to civilian gun control regulations that are much stricter than American laws. In fact, it’s pretty much impossible for civilians who live in Israel to acquire an arsenal of weaponry of the sort used by the alleged shooter in last week’s massacre in Aurora, Colo. James E. Holmes, who is accused of killing 12 people and wounding 58 in an Aurora movie theater, legally bought the firearms he used, according to reports, including a semiautomatic rifle, a semiautomatic pistol and a 12-gauge shotgun. Leading up to the shooting, he reportedly bought thousands of bullets online. In Israel, assault rifles are banned except for special circumstances. And while political violence in Israel is all too common and gun violence is a growing problem, random shootings of strangers — like the Aurora massacre — are virtually unheard-of here. Unlike in the United States, where the right to bear arms is guaranteed in the Constitution’s Second Amendment, Israel’s department of public security considers gun ownership a privilege, not a right. With few exceptions, gun owners in Israel are limited to owning one pistol, and must undergo extensive mental and physical tests before they can receive a weapon. Those who have not served in the military or in a government volunteer agency must wait until age 27 to apply for a firearms license. Gun owners are limited to 50 rounds of ammunition per year. West Bank settlers can obtain permits to carry guns for security purposes.

Lior Nedivi, an Israeli firearms expert, said that despite Israel’s militarized society, neither soldiers nor veterans engage in extensive gun violence because 18-year-olds are tested for mental and physical fitness before being drafted. “They don’t recruit everyone,” said Nedivi, who runs a company called Advanced Forensic Science Services. “If you are a person with a record of violence, you will be discharged.”Nedivi favors allowing private gun ownership with tight regulations, noting that armed civilians have used their guns to stop terrorists during attacks. He said that gun massacres don’t occur in Israel because gun owners here undergo more comprehensive psychological screenings than do U.S. gun owners. “It’s not guns that kill, it’s people that kill,” Nedivi said. “If this person in Colorado will be screened now, they will say he has mental problems. In Israel, most people like this don’t get a chance to get a gun. ”Gun violence does still occur in Israel, though gun control is not a sensitive political issue. “We think the society is over-armed,” said Smadar Ben-Natan, a lawyer who co-heads Gun-Free Kitchen Tables, an Israeli coalition to end domestic gun violence. “There are too many weapons going around. There is no justification that these weapons go home and are present in civilian surroundings. ”Rather than lobbying for new laws, Gun-Free Kitchen Tables is pushing for the enforcement of current regulations, which require security guards to leave their weapons in their workplace. Ben-Natan said private security companies often do not abide by the law. “The private police companies offer an illusion of security,” Ben-Natan said. “They’re not accountable in terms of the public interest. They don’t bear the cost of the precautions that need to be in place. The people that pay this price are the women and family members who get shot. ”For soldiers who take their weapons home on weekends and off nights, the rule is they must be on their person at all times or under double-lock if left at home.